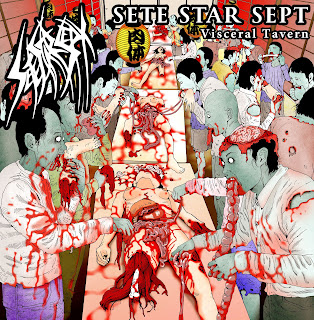 Album Info : A lot of people say they "live to play music". It's a bit of a cliche. But occasionally, you meet people that actually do. That sacrifice everything and dedicate their lives entirely to perfecting their artistic craft of music. Kiyasu and Kae are two such people, more than anyone else I've ever met. These two have spent the last few years doing nothing but grinding in every corner of the plant earth, practicing four times a week, and recording every chance they get. And it shows. Because together, they are the best grind band in the world.
I think we (as in, me, the band, and our friends) all agree that this is Sete Star Sept's finest effort to date. Which is to say, it's the best grind record of the year, maybe the last few years. The A-side sees them playing raw grindcore that straddles the line with noisecore yet remains song-oriented enough to stay cohesive. Smiles all around. The B-side sees them diving into an exciting, forward-thinking new style that draws upon the famous improvisation and stream-of-consciousness performance aspects of their live shows. Everybody's scratching their heads.....and we're all still smiling. Best band.
Review :